the origin of Mt. Inunaki 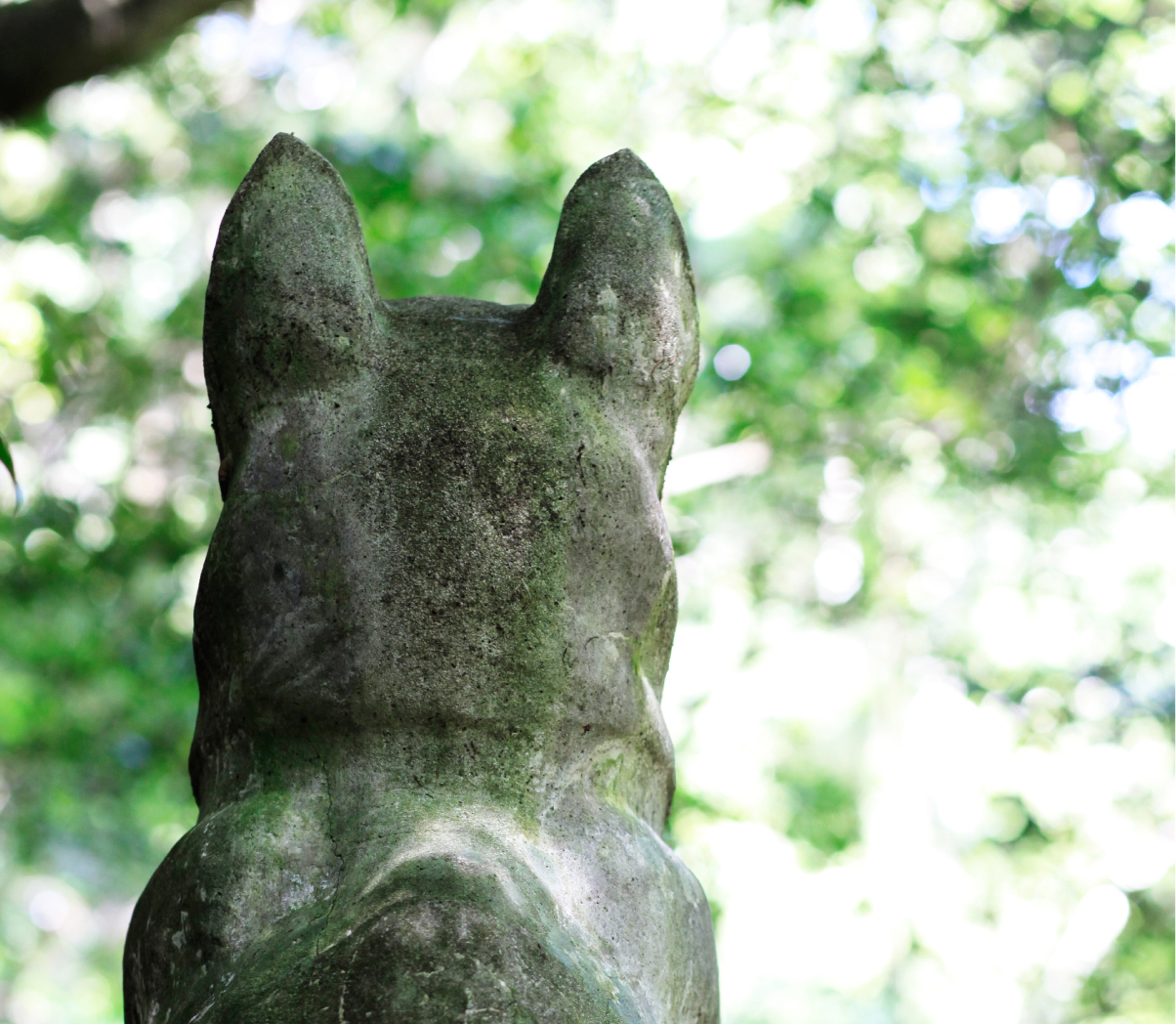 In March 890, in the reign of Emperor Uda (889-898), a hunter from Kii province followed a deer up to the training spot now called “Jabara” with his dog. A large snake was about to swallow up the hunter. However, he didn’t realize it. The moment he drew his bow to shoot an arrow, his dog began barking loudly. Surprised at the dog’s barking, the deer run away. Having missed out on the opportunity to catch his prey because of the dog’s barking, the hunter got angry and cut off the dog’s head by with his woodman's hatchet. 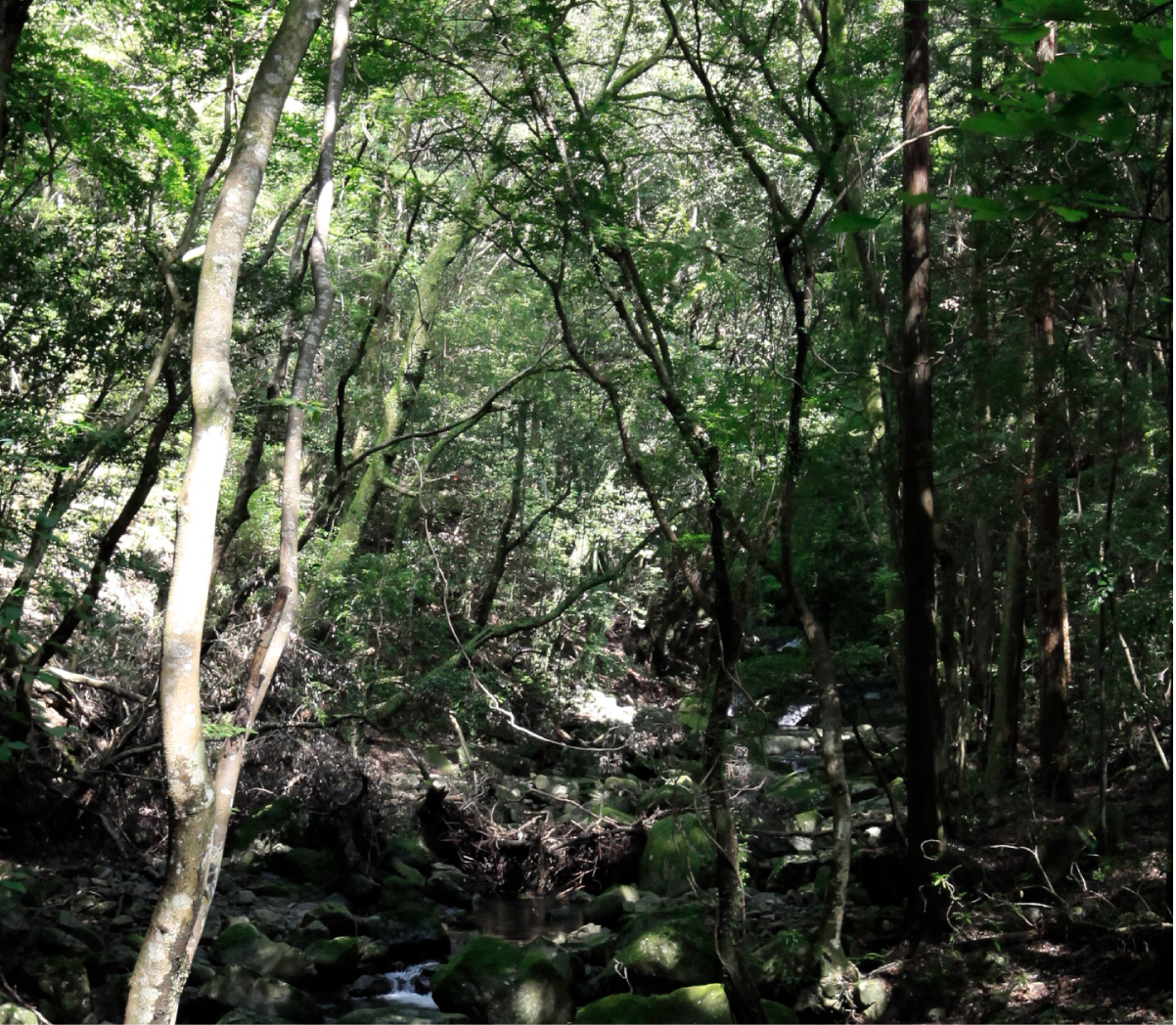 Though detached from the body, the head leapt up and bit into the large snake that was about to swallow up the hunter. After that the dog perished along with the snake. Knowing this, the hunter regretted what he had done. He buried the remains, and made a stupa from his bow. It has been believed that he entered Shipporyuji and became a monk, holding memorial services for the dog. Later, Emperor Uda was so impressed by the dog’s faithful behavior that he gave the mountain a new name. It changed its name from Ichijo-suzukine-gatake, (also called Mt. Ichijo, or Suzukine-gatake) to “Mt. Inunaki (dog barking).”

In 661, in the reign of Emperor Saimei, En no Gyoja, who is said to be the founder of Shugen-do, founded Mt. Inunaki at the age of 28. It is called “Moto Sanjo” because it was founded six years before Mt. Omine in Yamato province. It is said that when En no Gyoja founded the mountain, Kurikara Tairyu Fudo Myo-o appeared before him. He enshrined Fudo Myo-o as the principal image. It is said that Kobo Daishi, also known as Kukai, a Japanese Buddhist monk, also practiced Buddhistic austerities in this mountain and enshrined the Seven Gods of fortune in the seven waterfalls. Since then, the mystic spells of pray for national prosperity, a huge harvest and happy life for everyone are performed in Shipporyuji.
Mt. Inunaki is regarded as one of the oldest sacred mountains in Japan and developed independently. According to the recent study, thanks to the advancement of academic studies for the history of Shugen-do, Mt. Inunaki is considered as a birthplace of Shugen-do. At present, Shipporyuji as the main temple of Shingon sect Inunaki school, is one of the greatest sacred places for Syncretization of Shinto with Buddhism.

The origin of Haku-unin and Shizu’s tears

Inunakisan Shipporyuji is also called Haku-unin. This comes from a sad story about a woman. Long time ago, there was a mountain ascetic called Awaji no Kohijiri. As he paid a visit to the Imperial Palace, a beautiful court lady named Shizume fell in love with him. Because Kohijiri thought it would be a hindrance to his practice to be with her, he rejected Shizume and went to Mt. Inunaki. Shizume could not forget him, so she looked for him, traveling several countries.

Finally, she heard that Kohijiri was practicing in Mt. Inunaki in Senshu and went there to meet him. However, she got lost because of a steep mountain road, hunger, cold weather, and the sudden fog. In the end, she died in agony on the roadside. Villagers buried her with appropriate ceremony. After that, whenever the sky was really cloudy, it rains. Villagers said that the rain came from “Shizu’s teardrop.” Also, they call clear water welling out from the ground where Shizu lay “Shizu’s teardrop.” The tomb of Shizume stands around 100 meters below the main hall on the pathway to the shrine. Water still wells out from there just like her teardrop. Since then, the Shoin (reception building) is said to have been called Haku-unin. Also, when you have a wish, by bringing this water home and drinking it every day, it is said that your wish certainly come true. A hall was built to enshrine Shizu near there and has been worshipped as the jizo, a guardian deity, which fulfills people's wishes.

Restoration‐the period of the Northern and Southern Courts

As a strategic spot in Kii, izumi, and kawachi, Mt. Inunaki was in very close contact with the Southern Court. Due to the fact that some areas under the rule of the family of Masashige Kusunoki (Masayuki Kusunoki, Masatoki Kusunoki and Masayoshi Kusunoki) coincide with those under the yamabushi (mountain ascetics), the army corps consisted of both samurai and yamabushi from Kasagi, Yoshino, Kokawa, Inunaki and so on. In 1362, Masataka Hashimoto, who was the main war advocate in the Southern Court, invited Saint Shiitsu to Mt. Inunaki and built Fudo-do Hall. Saint Shiitsu rebuilt our temple. He was a renown Buddhist priest for wisdom and knowledge. The reason why Masataka invited Saint Shiitsu to Mt. Inunaki was not only that Saint Shiitsu was pious but also that Masataka wanted to depend on the powerful influence of ascetic practitioners in Mt. Inunaki.

Masataka Hashimoto and yamabushi in Mt. Inunaki continued their good relationship. In August 1375, he had Saint Gansho offer the 10,000 Buddhist scriptures and perform the ritual to pray for peace. He built fourteen sobos known as living quarters for monks. As a result, there were twenty sobos. In a battle that broke out from November to December in 1378, Masataka Hashimoto, in spite of his smaller military unit, successfully held Tsuchimaru Castle against the enemy forces with a larger size led by Ujiharu Hosokawa, Yorimoto Hosokawa and Yoshitada Yanama. This victory was actually gained thanks to the support from the yamabushi. In other words, they played an important role in helping Masataka have the advantage over their opponents. Though Masataka lost this battle and pulled back to Kii, in 1379 he left Kii for Izumi again and reconquered Tsuchimaru Castle. Then he raised an army but he lost. In summer, he crossed that mountain and went to Izumi. It is easy to imagine that a yamabushi played an important role in helping him cross the mountains.

In the Muromachi Period, as Kumano Shinko(beliefs) and Katsuragi Shugen-do became popular, our temple also flourished. A lot of old memorial towers still exist everywhere in the mountain. In this period, Tanemichi Kujo(1504～1558), the Kanpaku (the Imperial adviser) and the Naidaijin (Minister of the Interior), visited our temple and composed a poem. Some courtiers also visited the mountain.

In the Azuchi-Momoyama Period, also known as the Sengoku period (period of warring states), samurai warriors and local ruling clans struggled with each other seeking to expand their influence. Many mountains in Kinki area suffered from fire caused by war and most famous temples were in a tough situation. Also, Nobunaga Oda confiscated several hectares of our territory because things didn’t go as he had expected. In 1585, most of the Buddhist halls, including the main hall were burned down by fire caused by Hideyoshi Toyotomi. Later, however, Hideyosi donated some grains and rebuilt the Takibo (now Shukubo), giving 30 goku (equivalent to 4,500 kilos of rice) as an offering.

In the Edo Period, with the restoration of Shugen-do, our temple also flourished again. In 1652, Kannon-do Hall was built. During the Manji Period (1658-1661) the main hall was repaired, and the current stone bride under the main hall was built. Also, Yukitaka Okabe, the second lord of Kishiwada Domain, donated new rice paddy field. More and more people came to show their profound faith. In 1720, the main hall was rebuilt and Yukiyasu Meshino, a wealthy merchant in Sano Domain, donated stone lanterns and Annen Hoshi complied a chronicle of the temple. In 1793, Nagatomo Okabe, the eighth lord of Kishiwada Domain, donated stone lanterns, and ancestral tablets of the Okabe family were installed. Also, there are stone lanterns and milestones donated by devotees from Yamato Kishu area, Edo, Osaka, Sakai, and Kishiwada. From this, we can understand how religious people at that time were. In 1849, “Katsurei Zakki”, which is the only historical material about Katsuragi Shugen-do in existence, was written by Chikou at this temple.

At the beginning of the Meiji Period, our temple was devastated due to Haibutsu Kishaku (a movement to abolish Buddhism) and the law banning Shugen-do. At the end of the Meiji Period, however, we rebuilt our temple. Since then, we have been contributing to the reconstruction, surviving the World War II. On August 7, 1950, we returned to the past religious order and announced ourselves as Shingon sect Inunaki school. As the central training center of Katsuragi Shugendo, we have been reconstructing our temple through activities such as setting the headquarters of Shugen-do. The total area of this temple is about 284,000㎡ and our temple became the target of worship as a sacred place enshrining Kurikara Tairyuu Fudo Myo-o. Focusing on Katsuragi Shugen-do and ascetic training at the sacred places in the mountains, we are greatly changing ourselves.

Temple ground and the 28 sutra mounds of Mt. Ininaki 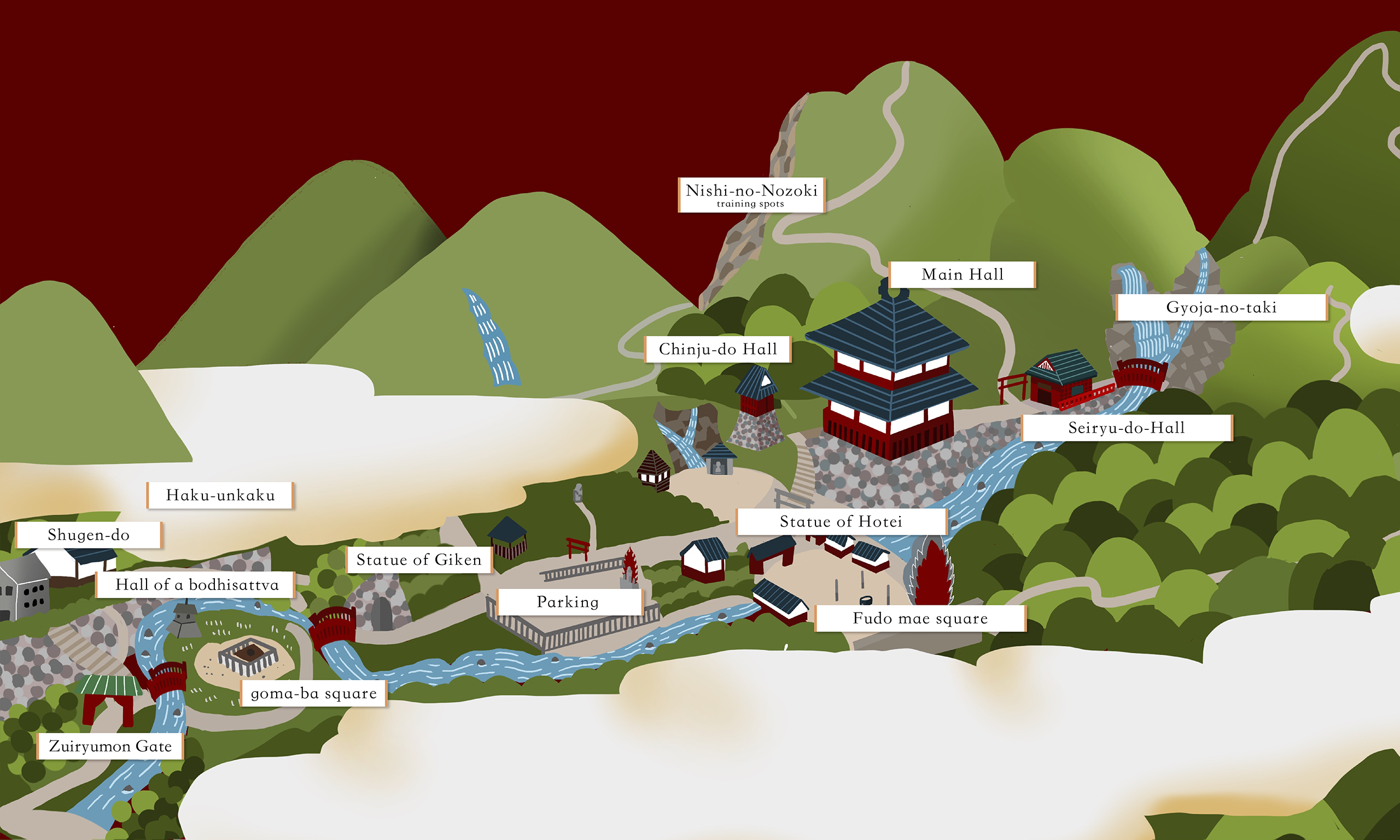 The whole mountain is an enormous training spot,
and there are 28 sutra mounds.

In Mt. Inunaki, there are many training spots, such as seven waterfalls, and the mountain itself is regarded as an enormous training spot. Copied sutras were buried in various areas, such as main training spots, waterfalls, rocks, halls, and small shrines just like the 28 sutra mounds of Katsuragi. And these 28 sutra mounds were built in the mountain so that pilgrims can walk around the area for discipline. This enabled many people to experience ascetic practices. 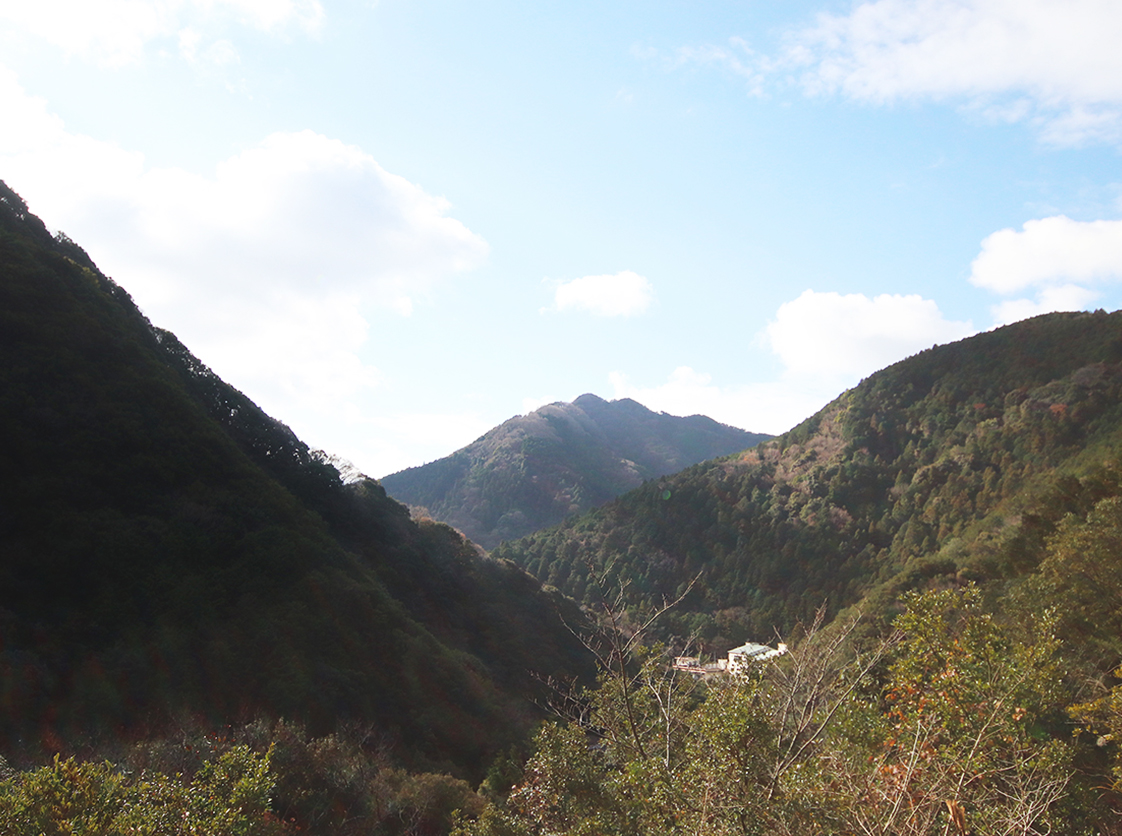 The origin of the 28 sutra mounds of Katsuragi

Mt. Katsuragi collectively refers to the Izumi and Kongo mountain ranges, whose peaks form the shape of the letter L, running across the boundary of four old provinces, namely Kii, Izumi, Yamato and Kawachi. Its total length is 112 kilometers, and it extends from Kada and Tomogashima in the west to Kamegase near the upper Yamatogawa river in the north. En no Gyoja, who is said to be the founder of the Shugendo tradition, buried each one of the 28 chapters of Hokke-kyo Sutra (Lotus Sutra) in various spots, and built sutra mounds on them. Then, he established 28 places where practitioners can confine themselves to pray. This is the “28 Sutra Mounds of Katsuragi.”

The area surrounding Shipporyuji is in the western part of Mt. Izumi-Kasturtagi, forming gorges in Izumi mountains. It is known as primeval old pine trees and the beauty of the gorge formed by 48 waterfalls. People can enjoy seasonal weather. For example, cherry blossoms in spring, frogs in summer, red leaves in fall. Inunakisan-shipporyuji, where En no Gyoja founded as a training ground for Shugen-do, is the oldest holy spot, healing travelers’ mind and bodies thanks to its fresh mountain stream and nature. As it is listed on the selection of 100 lushly green spots in Osaka, it is the best place for not only religious activities but also hiking. After trekking, why don’t you soak in Inunaki onsen hot spring?